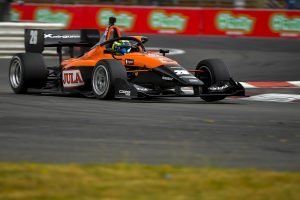 Global Racing Group with HMD Motorsports (GRG with HMD) drivers Linus Lundqvist and Benjamin Pedersen kicked off their West Coast swing with strong results at Portland International Raceway this past weekend. With six races remaining in the Indy Lights Presented by Cooper Tires Championship, and the two drivers sitting third and fourth in the championship standings, Lundqvist and Pedersen were eager to continue their fight and gain valuable points and podiums.

From the start, the GRG with HMD cars exhibited their speed with Linus Lundqvist topping the charts in both testing sessions on Friday morning. His teammate, Benjamin Pedersen, improved his speed over the two sessions, jumping from fifth to third. In the official practice session later that day, Lundqvist finished second followed by Pedersen in third. Ending the busy opening day in Portland, the Indy Lights field completed the qualifying session for race one with the entire HMD Motorsports and Global Racing Group lineup claiming the top-four positions with Lundqvist qualifying second and Pedersen third. Saturday began with an additional qualifying session for race two and the GRG drivers, yet again, claimed two of the top-three spots with Lundqvist and Pedersen repeating their second and third place qualifying efforts from the day prior.

Later that day, the drivers lined up for the first 30-lap race of the weekend. In classic Portland International Raceway fashion, turn-one was set to be a challenge for the field of eleven drivers. At the start of the race, multiple drivers missed the first and second turns and a full-course caution was called. After a chaotic start, race officials reset the field with the HMD Motorsports and Global Racing Group drivers back up front in their qualifying order. After a single file restart on lap four, drivers held their positions for the next four laps. While battles raged behind the eventual winner of David Malukas and the GRG with HMD outfit aiming to sweep the podium, a fellow competitor would have a say in those efforts as Lundqvist and Pedersen finished third and fourth respectively. 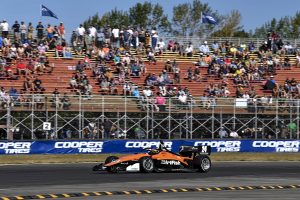 Sunday morning, prior to the start of the NTT INDYCAR Series Grand Prix of Portland, the Indy Lights field took the green flag for their second and final race of the weekend. Again, starting second and third, drivers made it through the first turn of the race without incident. Going side-by-side with the eventual race winner through the first two turns, Pedersen slotted into fourth. Through the remainder of the opening lap, the top three drivers – David Malukas, Lundqvist and Kyle Kirkwood – remained nose to tail. Heading into lap two, Lundqvist and Malukas were battling for the lead when Kirkwood was able to sneak by both drivers and took over the lead. Through the remaining twenty-eight laps, the front of the field remained unchanged and Lundqvist finished on the podium in third for the second time of the weekend and Pedersen finished fourth.

With two podiums and four top-four finishes between the two GRG with HMD drivers in Portland, the team is now looking to carry the momentum forward into this weekend when the team travels down the coast to Monterey, California and WeatherTech Raceway Laguna Seca for rounds 17 and 18 of the 2021 championship. As the season finale comes into view, the four remaining races will be vital for the championship. 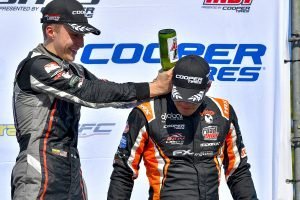 Heading to Laguna Seca, the HMD Motorsports and Global Racing Group team is feeling poised to lead the field. Earlier this season, the three full-time drivers completed a two-day test at the 2.238-mile track where they were able to learn the course and fine-tune their setups for the weekend.

The weekend will begin on Friday morning with one 45-minute practice session before moving immediately into the first qualifying session later in the day. Saturday will see one additional qualifying session closely followed by the first race of the weekend. Drivers will finish off their time on the West Coast with one final race on Sunday morning just prior to the NTT INDYCAR Series Firestone Grand Prix of Monterey.