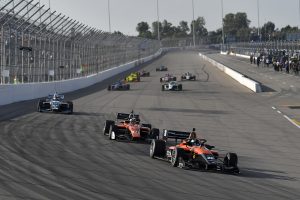 Global Racing Group (GRG) with HMD Motorsports will be kicking off their West Coast swing this weekend at Portland International Raceway before continuing south to WeatherTech Raceway Laguna Seca the following week. With only four weeks remaining in the 2021 Indy Lights Presented by Cooper Tires Championship, the weekend will complete two of the remaining six races as the championship battle rages on. A new track to both of the GRG drivers, there will be ample opportunity to learn the 1.964-mile, 12-turn course of Portland International Raceway.

Linus Lundqvist, who started the season strong with two wins and four additional podiums in the opening half of the season, will be looking to return to the podium and reclaim valuable championship points. Lundqvist has previously led the championship, but currently sits in third only 59 points behind the current leader and HMD Motorsports teammate, David Malukas.

Coming off a strong weekend with a double podium result at the World Wide Technology Raceway three weeks ago, Benjamin Pedersen has catapulted himself up through the championship standings from eighth to fourth. With four podiums this season, Pedersen is still fighting for his first win in the Indy Lights Championship and that could come this weekend in Portland.

With fourteen rounds complete so far, all three of the full-time Global Racing Group and HMD Motorsports drivers are in the top-four of the championship standings and currently lead the Team Championship.

Prior to the official race weekend, Portland International Raceway will host the final two series test sessions of the season on Friday, followed by official practice later in the day. Drivers will have over four hours of available practice leading up to the first qualifying session of the weekend, taking place on Friday afternoon. Saturday will open with a late-morning qualifying session for the second race, followed by the first wheel-to-wheel race of the weekend beginning at 1:55pm PDT. The weekend will come to a close on Sunday morning with race two beginning at 10:30am just prior to the NTT INDYCAR Series Grand Prix of Portland.