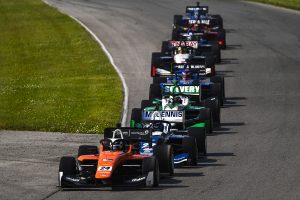 Global Racing Group (GRG) with HMD Motorsports spent their past weekend at the 2.4-mile Mid-Ohio Sports Car Course for the start of the second half of the Indy Lights Presented by Cooper Tires season. Since joining the Road to Indy Presented by Cooper Tires Championship this season, GRG has finished on the podium at each of the opening five venues and were looking to do the same in Ohio.

Beginning with three test sessions followed by an official practice, Linus Lundqvist and Benjamin Pedersen found themselves running in the front half of the 13 car field. Lundqvist, who won three times at Mid-Ohio in the 2020 FR Americas Championship, had an off in both the final test session and official practice limiting valuable track time but rebounded in qualifying to find himself in the top-five on the results sheet. In both instances, the GRG with HMD crew was able to repair his car so that he did not miss a session and after limited track time, Lundqvist was still able to qualify in fourth for the first race of the weekend. In the second qualifying session, Lundqvist continued to improve and qualified in third for the second race. Benjamin Pedersen was able to steer his Colibri Capital / Ameriprise Financial #24 entry to sixth and seventh place qualifying positions all while saving a set of new Cooper Tires for when the wheel-to-wheel action commenced.

The first race began Saturday afternoon and both GRG with HMD drivers immediately found themselves in close battles for position. Benjamin Pedersen closely battled with a fellow competitor for fifth in the opening few laps and was able to hold on to his sixth place starting position for the first half of the race. On lap 26 of 35, Pedersen suffered a cut left front tire as the handling immediately went away on his car. Unable to show the speed that he had earlier in the race, Pedersen dropped one position and salvaged a seventh-place result. Meanwhile, Lundqvist was able to hold off the advances of the fifth-place driver in the late stages to finish just off the podium in fourth. 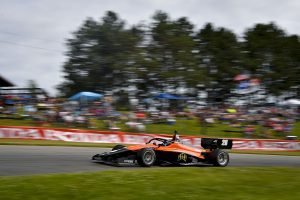 In the opening lap of race two, both Lundqvist and Pedersen again fought hard for position with Lundqvist going side-by-side with the eventual winner for second in the first couple turns and Pedersen battling wheel-to-wheel for sixth. By the end of the first lap, Lundqvist held on to third and Pedersen was able to make the pass, move up into sixth, and began hunting down one of his championship rivals in front. After a full-course caution, Pedersen was forced to defend against the driver behind on the restart and was able to hold his position all while multiple passing attempts were made. During lap fifteen, Lundqvist slid wide through turn two and was passed by his HMD Motorsports teammate David Malukas. Meanwhile, Pedersen continued to hold off the driver behind while he continued to focus forward at a top-five result. While the final eleven laps did not go the way Pedersen had hoped, he did manage to cross the stripe in the eighth position and earn enough points to move himself to eighth in the championship standings. Lundqvist again finished the race in fourth.

After a busy four weeks filled with three event weekends and six races, Indy Lights Presented by Cooper Tires will now enter a six-week summer break before beginning the final stint of the season. With four event weekends remaining, Linus Lundqvist is still very much in the Championship battle along with his HMD Motorsports teammate David Malukas. Taking the next few weeks to recover and recharge, Global Racing Group and HMD Motorsports will come back strong and ready to battle to the end.

Stay tuned to the Global Racing Group social media pages for news, information, photos, and results from the event weekend.