Global Racing Group with HMD Motorsports arrived at the famed Indianapolis Motor Speedway for the fifth and sixth rounds of the 2021 Indy Lights Presented by Cooper Tires Championship this past weekend. Earning one pole position, one victory, two top-five results and four top-ten finishes, the combined effort with HMD Motorsports currently sits first and second in the Drivers’ Championship and leads the Team Championship by a healthy margin.

With two series test sessions taking place before the first official practice session of the weekend, the GRG with HMD crew had over 2.5 hours of practice time leading up to the first qualifying session of the weekend.  Linus Lundqvist, who was visiting the Indianapolis Motor Speedway for the first time, quickly worked his way to the top of the time sheets in both test sessions and finished in third during the official practice session on Thursday. Benjamin Pedersen worked to find speed in the opening sessions of the weekend, finishing ninth in the opening test but would progress throughout the weekend.

With testing out of the way, GRG with HMD entered into Friday with an early morning qualifying session in preparation for the first race of the weekend later that day. Qualifying on pole, Lundqvist was able to hold his lead for the entirety of the thirty-lap race, finishing 2.2922 seconds ahead of his HMD Motorsports teammate, David Malukas, and over eight seconds ahead of the rest of the field.  With two wins and two additional podiums so far this season, Lundqvist was able to take over the Championship lead heading into second race of the weekend. Benjamin Pedersen, who had finished eleventh in the two previous practice sessions, was able to find a bit more speed and qualified ninth for race one and ultimately finished the race in the tenth position.

Saturday’s schedule format repeated that of Friday with an early morning qualifying session followed by race two later in the afternoon. With qualifying times tight, Lundqvist qualified second, only 0.0955 seconds behind Malukas and 0.013 seconds ahead of the third-place qualifier. With nearly the entire field within one second of each other, Benjamin Pedersen qualified in the tenth position, a scant few tenths from the top-five. In the early stages of the race, Lundqvist had a slight bobble and an off-track excursion and ultimately ended up dropping back to finish the race in fifth. Pedersen was able to chase down Sting Ray Robb over a few early laps before making the move to get by and advance forward to finish in ninth. 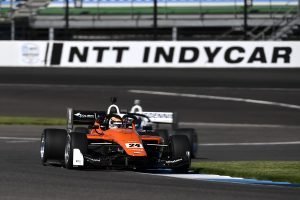 Ending the Indianapolis Grand Prix weekend, Lundqvist currently sits second in the Indy Lights Presented by Cooper Tires Championship and Benjamin Pedersen is eighth. As a team, competing under the HMD Motorsports banner, and with a total of five wins in six races, HMD Motorsports currently has a strong lead in the Team Championship.

As the racing world turns their eyes to the NTT INDYCAR Series and the 105th running of the Indianapolis 500 for the remainder of the month, Global Racing Group with HMD Motorsports will be staying busy and focused on the remainder of the season, with private tests planned at both Road America and Mid-Ohio Sports Car Course.

The Road to Indy Presented by Cooper Tires will return in just over three weeks to the streets of Detroit, Michigan June 11-13 for the next two rounds of the championship.