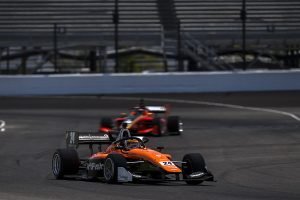 After a long six-week summer break, Indy Lights Presented by Cooper Tires is gearing up for the final stretch of the 2021 season. Beginning this Thursday, Global Racing Group with HMD Motorsports will partake in Rounds 13 and 14 at World Wide Technology Raceway in Madison, Illinois, only ten minutes from downtown St. Louis. Both Linus Lundqvist and Benjamin Pedersen will be competing in the first oval event in their careers.

As both Indy Lights and oval rookies, Global Racing Group and HMD Motorsports drivers took a trip to the 1.25-mile oval last week for a two-day test in preparation for the season’s only oval event.

“Last week’s test was very productive,” expressed Benjamin Pedersen, who has claimed a pair of podium results to date this season. “I got to run my first laps on an oval, and we had strong pace in both qualifying sims and longer race runs. I am looking forward to taking what we learned into the double header race this weekend!”

“Getting my first oval experience was awesome,” added Linus Lundqvist, who currently sits third in the championship point standings. “It’s one of the things that I’ve been really looking forward to the whole season since I’ve never done it before. I didn’t really know what to expect, but it was good to get two days last week to sort of get through everything and warmed up to it. I absolutely loved it from the first lap I did. I was able to get into it properly with race trim and running in traffic. Obviously, we still have work to do, but I think we started off well and I’m super excited to get going.”

Lundqvist added, “It’s going to be nice to be back after summer break as well. It was good to see all the guys on the team again; they’ve been hard at work and they’re equally as excited as I am to be getting back to winning.”

Heading into the weekend, both Lundqvist and Pedersen are looking to return to the Indy Lights podium. Lundqvist has scored six podiums this year with two wins but has not earned a podium finish since Round 8 at Road America. Pedersen has produced two podiums so far this season with a second-place finish at Barber Motorsports Park and Road America. 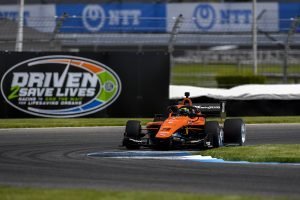 With eight races remaining in the 2021 season, both the Team Championship and Driver Championship are up for grabs. Heading into the weekend, HMD Motorsports (with Global Racing Group) has continued to lead the Team Championship and currently has a seventeen-point advantage over their closest rivals. Lundqvist, who has remained in the top-three all season, is currently third in the championship fourteen points behind his HMD Motorsports teammate, David Malukas, and twenty-five markers behind the champion points leader.

In addition to the two test days earlier this month, the Indy Lights series will host two additional test sessions on Thursday before official practice begins on Friday. As part of a double-header weekend, qualifying will look a little different from prior events. Taking place on Friday afternoon, drivers will be given two laps to qualify for both races – with a warmup lap, the first lap timed will set the grid for race one while the second lap time will be for race two. Two hours later, drivers will take the green flag on Friday evening for the first wheel-to-wheel action of the weekend while the event will come to a close on Saturday night with race two beginning at 5:30pm just prior to the NTT INDYCAR Series Bommarito Automotive Group 500.