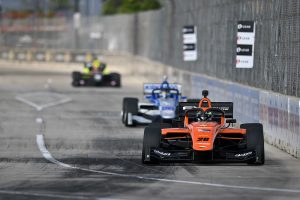 Taking to the Streets of Belle Isle in Detroit, Michigan, the Global Racing Group with HMD Motorsports drivers, Linus Lundqvist and Benjamin Pedersen, had a consistent weekend while gaining valuable championship points. Closing the weekend with two podium results, Lundqvist took over the top spot in the Indy Lights Presented by Cooper Tires Championship standings as Pedersen proved his speed on Sunday to drive to an impressive sixth place finish.

During Qualifying 1 on Friday afternoon, Lundqvist was strong out of the gate and qualified on the front row in the second position. With the front half of the field being separated by only 0.8803-seconds, Pedersen was able to qualify for the first race of the double header weekend in seventh. Saturday morning kicked off with an early morning qualifying session for Race 2, where Lundqvist claimed the pole position and Pedersen again qualified in the seventh position and on the inside of row four.

In the first wheel-to-wheel action of the weekend, Linus Lundqvist held on to his second-place position through the entirety of the race. With six laps remaining, the #26 entry was able to break into the push-to-pass zone and began closing the gap on the eventual race winner. With a 0.6-second gap in the final lap, Lundqvist had put himself in a strong position, but was unable to attempt a pass and crossed the line in the second position. Benjamin Pedersen, in a fierce on track battle with a trio of competitors, put on a show nearly the entirety of the 25-lap race. By lap ten, Pedersen was right on the rear wing of Robert Megennis and was setting up to make a move but was unable to complete the pass. Resetting over the next couple of laps, Pedersen had reeled Megennis back in and, on lap fourteen, made another attempt to go around the outside of Megennis in turn one and narrowly missed the wall but managed to stay side-by-side through turns one and two. In turn three, Pedersen had a huge slide, drifting through the corner, again just missing the tire barrier before continuing. Three laps later, Pedersen was back on Megennis’ tail and was setting up for yet another battle between the two drivers. Unfortunately, with seven laps to go, Pedersen made slight contact with the wall and a bent toe link relegated him back to the eleventh position.

Drivers took to the track early Sunday morning for the second and final race of the weekend. With Lundqvist starting on the pole position beside his HMD Motorsports teammate David Malukas, and Pedersen starting from seventh, the Global Racing Group with HMD Motorsports drivers were ready for another battle in the streets of Belle Isle. At the start of the race, Lundqvist would fall to second on the opening two laps while Pedersen fell back into ninth. 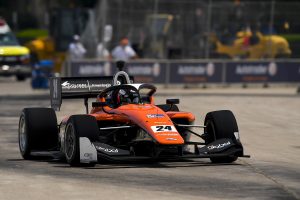 As the race progressed Pedersen moved back into eighth, a driver in the wall brought out a full-course caution and drivers began to bunch up again in preparation for the restart. Again, struggling in the restart on lap twelve, Pedersen fell back one position which ignited a spirited drive forward and by the end of the race, he had eventually marched his way to the sixth position. Ahead of him, Lundqvist had a hard-fought battle to the end, but was unable to get by the eventual race winner and had to settle for his second, second place result of the weekend.

Two second place finishes later, Lundqvist currently leads the Indy Lights Presented by Cooper Tires Championship only one point ahead of his stablemate David Malukas and four points ahead of the third-place driver.

Taking no time off, Indy Lights will now head to Elkhart Lake, Wisconsin this coming weekend for rounds nine and ten at the famed Road America.