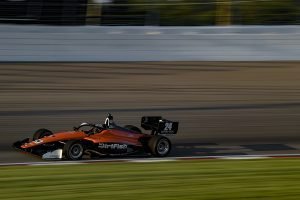 Over six weeks since the Indy Lights Presented by Cooper Tires Championship Series last raced, Global Racing Group (GRG) with HMD Motorsports headed to World Wide Technology Raceway this past weekend for the first and only oval event on the schedule and the first oval for both series rookies Linus Lundqvist and Benjamin Pedersen. As a double header weekend and points being worth 150 percent of a normal event, it was set to be an important race in the championship battle.  For the GRG with HMD team, it was a weekend of highs and lows as the team and series struggled with tire wear on the 1.25-mile oval in Madison, Illinois.

After taking part in a two-day test the week prior, the Road to Indy Presented by Cooper Tires weekend began with an official series test day on Thursday, where the drivers were given an additional two hours of test time. In both test sessions, Pedersen and Lundqvist finished in the top-five and were excited for how the weekend was beginning to shape up. Teams and drivers then prepared for a busy Friday – with one practice session, qualifying and race one all on the schedule. In the late afternoon practice, Lundqvist topped the charts while Pedersen finished in third. Diverging from the standard qualifying format, each driver was given three laps to qualify for both races. After one warmup lap, the first up-to-speed lap qualified the drivers for race one and the second qualified for race two. Pedersen qualified third and fourth and Lundqvist qualified fourth and fifth for the two upcoming races.

In the late afternoon on Friday, drivers took the green flag for race one with Pedersen and Lundqvist starting side-by-side from row two. As the two drivers went wheel-to-wheel through the first lap, Lundqvist ultimately got by Pedersen and took over the third position. During lap two, Lundqvist was able to take advantage of a mistake by a fellow competitor and took over the second position. During lap twenty-eight, the caution flag flew to collect two cars who had retired from the race. With a restart on lap thirty-six, Lundqvist again battled for second holding his competitor at bay after minor contact that resulted in no damage as Pedersen followed along in fourth.

Disaster would strike with sixteen laps remaining as Lundqvist hit the wall in turn four, due to no fault of his own and sustained heavy damage to his car. After five caution laps, the race was ended prematurely for safety concerns due to excessive tire wear. While disaster struck for Lundqvist, Pedersen advanced one position and finished the race with in third – his third podium result of the season.

As tire wear and safety concerns continued through Friday evening, Road to Indy officials altered the race format for Saturday’s race. The race was split into two thirty-five lap segments and would be divided by a red flag where drivers would make a mandatory pit stop to change the right-side tires and refuel. With the purpose of reducing tire wear, all cars went out with a half tank of fuel to reduce the overall weight of the car and the load on the tires. During the Saturday afternoon warmup, all cars would be required to scrub their second set of right-side race tires for a minimum of three laps.

After Lundqvist’s crash on Friday, the #26 Dallara IL-15 was deemed unrepairable while at the track, but the GRG with HMD team came prepared though and was able to pull out their #59 backup car for Lundqvist to use. 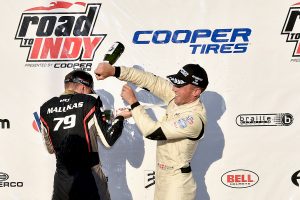 At the start of the second race on Saturday afternoon, Pedersen was able to move around the third-place starter on the opening lap to take over third. Lundqvist, who was in fifth, took advantage of the loss of speed from the competitors in front of him by being passed and moved up into fourth through turn four of the opening lap. Five laps in, the top-four drivers began to spread out and pull away from the remainder of the field. On lap thirty-two, a caution was called for debris for two laps before the scheduled red flag was flown one lap earlier than planned. Drivers then came in for a tire change and to refuel. With thirty-six laps remaining, drivers again pulled back on track for a single warmup lap and the restart occurred with thirty-four laps remaining. With Pedersen holding on to third, Lundqvist briefly battled with the fifth-place driver but was able to maintain his fourth-place position. As drivers began to spread out again, another caution was called with thirteen laps remaining and the checkered flag eventually followed with additional tire concerns. Benjamin Pedersen finished on the podium in third, his second podium result of the weekend and fourth of the season while Linus Lundqvist recovered from Friday’s crash with an impressive fourth-place finish.

With the championship battle continuing, Lundqvist held on to the third position in the overall standings. With points being worth 150 percent, Pedersen was able to make an impressive jump in the standings from eighth to fourth – placing all three GRG/HMD drivers in the top-four of the Indy Lights Presented by Cooper Tires championship.

Teams and drivers will now have a two-week break before heading to the West Coast for back-to-back race weekends. Portland International Raceway will be up first on September 10th-12th followed by World Wide Technology Raceway Laguna Seca on September 17th-19th. 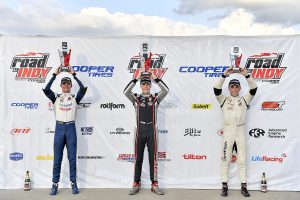