The Global Racing Group with HMD Motorsports team experienced the highs and lows of street racing at this past weekend’s Grand Prix of St. Petersburg. Taking to the streets of downtown St. Petersburg, Florida and the Albert Whitted Airport, both Benjamin Pedersen and Linus Lundqvist were eager to experience the tight corners of their first street circuit in the 2021 Indy Lights Presented by Cooper Tires Championship.

Taking place over the jam-packed three-day weekend, the GRG with HMD team only had one practice session on Friday morning before heading into two qualifying sessions later that day. As rookies to both the series and the street circuit, Pedersen and Lundqvist finished their first on-track session mid-pack in the fifth and sixth positions. Later that afternoon, after the two qualifying sessions, Lundqvist was set to begin race one from sixth and race two from seventh while Pedersen slotted rows four and five for rounds three and four.

After a long start to the morning, the Indy Lights field took to the track on Saturday afternoon for their first wheel-to-wheel action of the weekend. Unfortunately, for the Global Racing Group crew, the two drivers ran into some issues that hindered their on-track results in their first street circuit race of the season. While both drivers were able to bring their cars home and finish the race on the lead lap, they finished at the rear with Lundqvist in ninth, after contact the forced him to the pits for repairs and Pedersen in tenth, after a last lap spin making a pass for the fourth position. 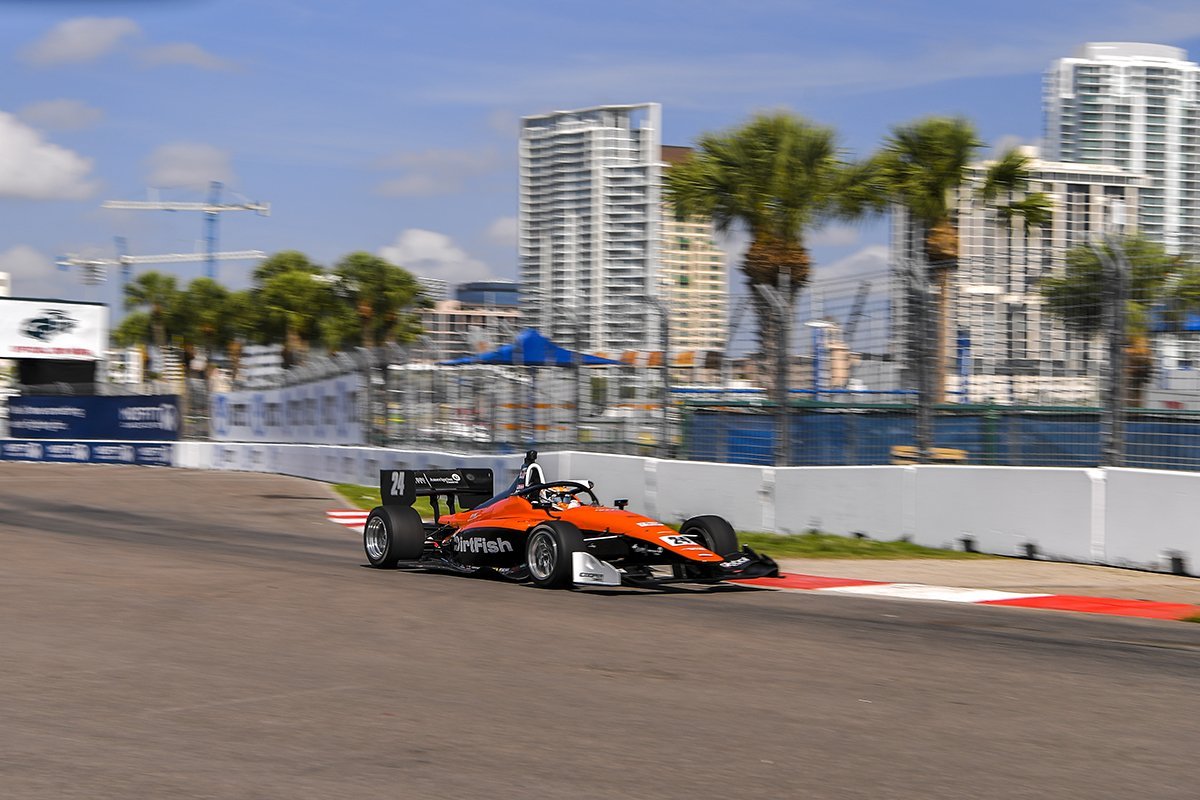 Leading up to the main event, the NTT INDYCAR series race, the GRG with HMD team took the green flag for their second and final race of the weekend on Sunday morning. Looking to overcome Saturday’s race, both drivers were eager to make up positions and championship points in the final race. In the opening lap, Lundqvist was able to move up from seventh and into fourth, while Pedersen moved up to seventh in the first five laps of the race. After a brief caution, and with over three quarters of the race remaining, Lundqvist took over the third spot while Pedersen closely battled the drivers in front. With the GRG with HMD positions remaining unchanged through the remaining majority of the race, Pedersen gained yet another position with only five laps remaining with a bold move around the outside of the first corner showing poise, precision and aggression. With both drivers coming back strong on Sunday after a disappointing Saturday, Lundqvist stood on the podium with a P3 result when the checkered flag flew with Pedersen gaining three positions to finish in sixth.

Leaving the weekend, Lundqvist currently sits second in the Championship behind his HMD Motorsports teammate, David Malukas, while Pedersen sits in sixth. After back-to-back race weekends at Barber Motorsports Park and the Streets of St. Petersburg, the Global Racing Group with HMD Motorsports team will have a couple of weekends off before their home race at Indianapolis Motor Speedway for the Grand Prix weekend, May 13th-15th.