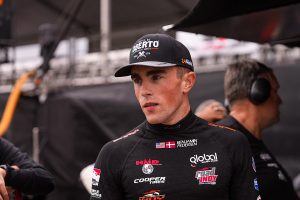 Global Racing Group with HMD Motorsports is excited to officially announce Benjamin Pedersen’s return to the Indy Lights Presented by Cooper Tires Championship in 2022. Returning for his sophomore season, the 22-year-old Danish driver has settled into his new residence in Indianapolis, Indiana, and is now busy preparing to be a Championship contender in the upcoming season.

In his rookie season, Pedersen started off strong with a second-place finish in the opening round at Barber Motorsports Park. Still learning the car and adjusting to the series, Pedersen returned to the top-five eight rounds later where he earned his second podium finish at Road America. After the first ten rounds of his 2021 campaign, Pedersen and his #24 entry had an average finish of seventh. In the second half of the season, Pedersen found his stride and became a challenger in the series. Finishing with four podiums and three additional top-five results, Pedersen propelled to fourth place in the championship behind his two teammates, David Malukas in second and Linus Lundqvist in third.

While Pedersen is still awaiting his first win in the Indy Lights series, he is returning to the Indy Lights program as one of the top-finishing drivers from the previous year and is sure to be up front and fighting for the championship.

“I’m very excited to get this 2022 season going,” expressed Pedersen. “We are solely focusing on our own program and have been very strong in the recent tests. We are working extremely hard to keep pushing ourselves and our goal is to go and win races and consistently be on the podium!”

Pedersen and the entire Global Racing Group with HMD Motorsports operation immediately began preparing for the 2022 season, completing multiple tests at a variety of tracks in the offseason. In an effort to gain an even stronger advantage, Pedersen moved to the Indianapolis, Indiana area towards the end of the 2021 season in order to be closer to the team and the heart of the Indy Lights and NTT INDYCAR Series. Focusing on his training, Pedersen has put all his focus into preparing for the forthcoming season.

Pedersen continued, “The goal for the future is clear and I am pushing forward 100%. In the coming months we will have a variety of different partner announcements. Stay tuned!”

As the end of the year winds down and with the next season quickly approaching, HMD Motorsports will have a handful of team and driver announcements in the coming weeks.