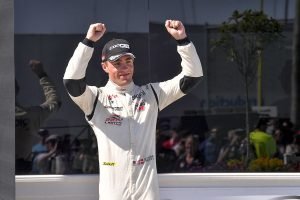 Coming off two podium results at Belle Isle Circuit, and driver Linus Lundqvist taking over the championship points lead, Global Racing Group with HMD Motorsports was eager to get their long weekend at Road America underway beginning with a series test day on Thursday. With two hours of testing scheduled and limited tire quantities available, Benjamin Pedersen sat out of the first session of the weekend, while his teammate, Linus Lundqvist topped the charts.

Friday officially started the weekend with a morning practice session, where the Global Racing Group and HMD Motorsports drivers saved their tires working on race setups with a best finishing position of seventh. After a short break, Qualifying 1 took place on Friday afternoon where Lundqvist qualified in fifth and Pedersen in tenth. The next morning, Qualifying 2 placed Pedersen ninth and Lundqvist seventh all before the wheel-to-wheel action kicked off. 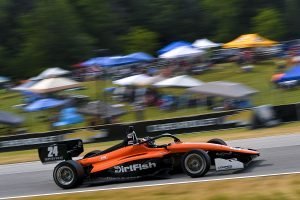 The first race of the weekend took place on Saturday afternoon. After a collision between the three front runners in the first turn of the race, Lundqvist moved up into the second position before he was able to pass for the lead two laps later. With chaos happening ahead of him, Benjamin Pedersen was able to stay out of trouble and moved up from tenth to sixth in the opening lap of the race, and on lap seven he was able to get by another one of his competitors for fourth and quickly began chasing down his teammate Lundqvist for third. After the halfway point of the race, the third-place runner pulled into the pits with a mechanical issue and Lundqvist and Pedersen moved into the second and third positions and with less than two laps remaining, Pedersen was able to get around Lundqvist on the outside and took over the second position. On the final lap, Lundqvist fell back to fourth as his tires fell off and he struggled to keep pace. For the second time this season, Benjamin Pedersen finished on the second step of the podium and Linus Lundqvist finished in fourth, a good points haul for the team.

The final race of the weekend began early Sunday morning with both Global Racing Group with HMD Motorsports drivers starting mid-field in seventh and ninth. In the opening lap, Lundqvist fell back into tenth while Pedersen moved up into eighth. After a caution during lap two, Lundqvist moved up into eighth and Pedersen into sixth as they started to move their way forward. After briefly swapping positions with a fellow competitor, Pedersen held on to and reclaimed sixth. Heading into lap five, Lundqvist was able to move into seventh behind Pedersen. As the two GRG drivers battled through lap five, Lundqvist was able to get around Pedersen and over the next thirteen laps, both drivers held on to their sixth and seventh place positions. However, with two laps remaining, Lundqvist advanced one more position forward to fifth gaining more valuable championship points. 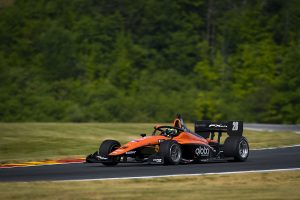 Benjamin Pedersen had one of his strongest weekends of the season, finishing second and seventh in the two races. While this was the first weekend of the season where Lundqvist left without a podium finish, he was able to have two consistent races, finishing both in the top-five, and firmly staying the championship hunt. At the half-way point of the season, he is eight points behind points-leader David Malukas and tied with Kyle Kirkwood for second.

After two back-to-back race weekends, the team will have the next seven days at home before heading to the Mid-Ohio Sports Car Course for a series test day and the next two rounds of the championship.